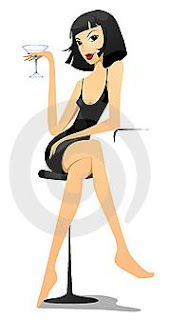 The starter sentence for FFF#12 is in bold. The rest is me...

TRANSVISION VAMP
She was always threatening to punch someone in the face, but this time she meant it.

Nicki’s personal rule was to carry out an assignment in a dispassionate and professional manner but this one was turning out to be something very different.

“I thought you’d never ask,” he replied, a salacious leer on his face as he moved closer with a drink in each hand.

Nicki felt nose cartilage snap as her first punch, a southpaw jab, connected and wiped the smirk away. She kicked off her heels, dropped the cigarette and danced softly from side to side on the balls of her bare feet.

“Rough enough for you honey?”

Getting into a rhythm she ducked inside and threw two successive punches to his flabby gut. A groan followed by exhaled halitosis as his hands dropped, leaving his chin exposed. A ferocious right left combination dropped him, dazed, onto the carpeted floor.

“This one’s not exactly Queensberry rules,” she said and booted him in the crotch.

The trial had been high profile and the TV news had broadcast pictures of him leaving the court, after the not guilty verdict, surrounded by his lawyer and other sycophant friends.

The rumours were rife of his connections to the “Organisation” and the protection that gave; an expensive legal team and witness intimidation that the authorities were seemingly powerless to prevent.

Eighteen months had passed since he had walked free.

When contact was initially made Nicki had made discrete enquiries. It seemed that his usefulness to the “Organisation” was waning. The persona of a shameless and debauched, ageing playboy lifestyle was becoming too much of an embarrassment.

The identity of her employer was academic. The contract was accepted and the clock began to tick.

Allowing him to pick her up at the club was simple. The temptation to drop something lethal into his drink and then slip away in the subsequent commotion would have been the easier option.

But Nicki wanted to get up close and personal.

The journey back to his plush apartment in the chauffeured limousine had been typically ostentatious and the chitchat banal.

“You stupid bitch there’s at least three security cameras in the foyer and the Limo driver...” He spat blood and loose teeth onto the shag pile. “With my connections you’ll be cold on a slab within twenty four hours.”

Nicki laughed and pulled her brunette wig free. She gave him a wink, “It’s all about misdirection baby.”

His eyes bulged as she wrapped one of her silk stockings around his neck. “Cat got your tongue?”

His reply was muffled gasp for air as Nicki steadily increased the pressure.

Afterwards she fired off a photograph from her mobile phone, which in turn would trigger the final payment of her fee into the offshore bank account.

Nicki went into the bathroom and stripped naked. She ran hot water into the washbasin and scrubbed her face clean of makeup then pulled a change of clothes from her handbag; faded denim jeans, white tee and blue canvass slip-on pumps.

The bathroom mirror reflected the transformation as he fingered gel through his short blonde hair.

Nowadays, Nick thought as he stepped over the prone body, even hit men needed a different angle.