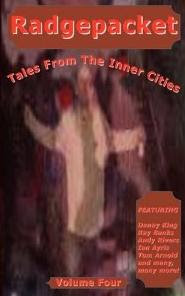 Radgepacket Volume Four, published by those nice people at Bykerbooks, arrived in the post a few days ago c/o Amazon.

Now, my TBR pile is a little daunting at present but I’d been eagerly awaiting this collection of short fiction and couldn’t resist sampling one straight away...

It had to be Paul Brazill’s The Night Watchman; featuring his Private Investigator from ‘Up North’, Peter Ord.

This was the first time I’d read an Ord story and Ord didn’t disappoint. It has all Paul’s hallmarks stamped over it; a wonderfully descriptive narrative, gritty dialogue sprinkled with deliciously dark humour plus those characters - I ask you, who else would describe a character with a face like a blackcurrant crumble!

I believe this is Paul’s debut in a print anthology although I know he has other stuff up and coming. It’s a fine debut from a talented and prolific writer who I know has a lot more to come in the way of published stories.

There are some super writers involved in this project: Ray Banks, Danny King and Andy Rivers to name just three more.

This should be an entertaining read and great value at £5.99 for 22 stories.

Have a good weekend folks.
Posted by Alan Griffiths at 10:17