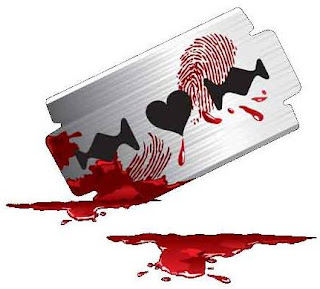 And here's my story:

Priest stood in front of the mirror, flinching at the patchwork of raw slashes.

I really don't mind the scars. It’s betrayal that cuts to the friggin’ bone.

Until this was settled he knew his constant companions would be a junkies craving for revenge and anger in the pit of his stomach burning like a pus filled ulcer.

Razorblade kisses I’ll wear for the rest of my days.

He’d been double crossed after a successful little tickle in leafy Surrey. Beaten senseless and carved up like a greasy kebab by Nick the Nonce and his goons.

Left for dead, amongst the mud and the cow shit.

The sound of car tyres on slick tarmac interrupted his reverie.

Priest snuck into the garage and unscrewed the light bulb. Rain beat a tattoo, cleansing the Saturday night detritus. A torrent of water flushing all the piss and puke and blood from the London gutters.

Could it purify my dark soul?

The garage doors swung up. A BMW saloon edged into the garage; came to a halt and the engine died.

“Shut it you tart. Where’s the bleedin’ light switch?”

Ernie Bradshaw, the Nonce’s six-foot-six enforcer, got out of the motor.

“Switch the headlights on, Razorblade I can’t see a fuckin’ thing.”

“Timber!” said Priest, pointing a Glock at Razorblade. “So much as sneeze and I’ll blow your swede clean off. Get out!”

“You’ve got this coming, Razorblade,” Priest said. “Tell me where the Nonce is and I’ll do it quick. Boy Scout's honour.”

Priest threw a hammer of a punch, spreading Razorblade’s nose like strawberry jam and dumping him on the floor.

Razorblade spat claret and, “At the club but he’ll be here later.” A dirty laugh came out as a whimper. “We came ahead with a little something in the car boot.”

“Who’s gonna be with him?” Priest said, pushing the pistol into his waistband.

“I’d best get ready then,” Priest said, hefting the Slugger. He beat Razorblade to a pulp and added; “Now that’s what I call a homerun.”

Priest dragged Ernie and then Razorblade through to the utility room, stuffing the two bodies into a chest freezer. Sat down and sparked up a Silk Cut. Puffing hard and wiping sweat from his brow he said, “Blimey, it’s all go around here.”

He made a pot of tea and a cheese and pickle sandwich. Ate half and supped his brew in the dark thinking dark thoughts.

The blade sunk deep. Grazing cheekbone and paring back a long ribbon of stubbly skin; a fat maggot wriggling out from beneath-

Priest jolted awake, sheathed with perspiration. He’d only closed his eyes for a few seconds. But it was enough. He drank deeply from a bottle of Chivas Regal, berating himself for his carelessness.

Razorblade kisses I’ll wear for the rest of my days.

Night was turning to day when he heard the revving of a throaty car engine; a Porsche reversing into a parking space on the other side of the mews.

The gang’s all here.

Five minutes passed. Phil the Greek entered the darkened room. “Boys. You there?”

“They’re both on ice,” Priest said, cutting Phil’s throat from behind with a bread knife as easily as slicing a peach.

The Nonce was coming up the stairs talking into a mobile phone. Priest’s smile was wolverine. “Hello, Nonce. You’ve got something of mine,” he said and swung a steel toe cap. “And I want it back.”

The Nonce came to, bound to one of his Georgian dining room chairs. Naked save a pair of soiled budgie smugglers.

“A fine morning for it, Nonce,” Priest said.

The Nonce spat broken teeth and, “For what you fuckin’ hooligan?”

“A spot of pruning,” Priest said, snipping off the Nonce’s left little pinky with a pair of wire cutters.

The Nonce roared curses; wailing like a tight fan belt.

“Swallow the pain you pussy and grow yourself a pair,” Priest said, shredding the Nonce’s discarded shirt. “You’re gonna take this like a man and then you’ll tell me where those gems are hidden.” Stuffing cotton strips between the Nonce’s swollen lips he added; “So cowboy up partner.”

Whistling ‘This Little Piggy’ tunelessly, Priest trimmed the right pinky at the knuckle. The Nonce bucking and squirming did his best to swallow the gag, passing out as his bloody thumbs fell onto the shag-pile.

Priest sucked a Silk Cut down to the filter then slapped the Nonce around until he revived.

The Nonce peed his pants and started to blub. When he was finished Priest said, “Back in a jiffy.”

The jewellery was in the safe along with a pile of cash. “It’s all gravy,” Priest said, scooping the lot into a holdall. He poured a large glass of whisky to celebrate and ate the rest of his sandwich.

Sated and with the swag counted Priest returned to the dining room.

“Nice doing business, Nonce,” Priest said. “I’d shake on it but you’re all fingers and thumbs.”

The Nonce croaked, “You can’t leave me like this you fuckin’ psychopath.”

“Too right,” Priest said, and in a heartbeat put a bullet into the Nonce’s canister. “No loose ends or happy ending.”

On the way out Priest heard muffled sounds coming from the garage. He popped the boot of the Beamer with the ignition fob, pointing the semi-automatic.

Trussed up like a Christmas turkey a young girl stared up at him with big, teary eyes.

Cracking what he hoped was a warm smile he gently helped her out. Looking up to the heavens Priest said, “Okay, just this friggin’ once.”