HOW THE BOOK TREATED ME: ABIDE WITH ME BY IAN AYRIS 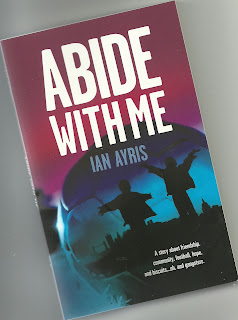 About a week before Christmas I was chuffed to bits to find out that I was the lucky winner of a copy of Abide with Me by Ian Ayris. Now then, I’m no book reviewer but as the book treated me very well I thought I’d post a few words here.

Abide with Me is not a long book, a hundred and fifty pages or so. That suited me fine and dandy and I cracked through this over the festive period. It’s not strictly a crime read although the last third certainly gets a little nastier. As the blurb says it’s a story that has elements of friendship, community, football, hope and biscuits… oh, and gangsters!

For me, Abide with Me is a cracking read because it has a real ‘voice’ - the voice of John Sissons. A story told first person point of view with an East London vernacular. A style of writing that maybe not for the fainthearted as there is more than a fair share of effing and blinding. But, it is the language that gives the narrative such a genuine voice, pulling the reader into the story from the get go.

Being a similar age to John Sissons, Ian Ayris paints a picture of London that I’m more than familiar with. Lovely hooks and signposts in the narrative that join the dots nicely: Primary school nativity plays. The long hot summer of 1976. F.A. Cup finals - always a big event regardless of the teams. The 1980’s recession. A changing workplace. A hard-lined government intent on tackling the trade union movement head-on. A country split; the Haves and the Have-nots. Intense class war. And, an ever growing list of the mass unemployed.

Abide with Me starts in nineteen seventy five. A London still not fully recovered from the damage caused by the Second World War. Austere times and a London filled with corrugated iron, latchkey kids and all daylong footie kick-a-bouts. And, not a Hooray Henry in sight! A London I remember fondly and yes I too had a red Raleigh Chopper bike.

Abide with Me is about a young lad, growing up fast, taking the emotional knocks life throws at you. Taking the blows on the chin and blindly ploughing on regardless. John Sissons struggles through a school of very hard knocks, emerging as a young man who now knows right from wrong. Harsh lessons learnt that some things are very precious: Family, friendship, community, hopes and dreams. And when you lose those it hurts like hell.

Abide with Me is a bruising, emotional roller coaster of a read and one that Ian Ayris should be truly proud of. It’s a remarkable debut novel. Scheduled for release in March 2012 and I recommend Abide with Me in a heartbeat.
Posted by Alan Griffiths at 01:37

Labels: ABIDE WITH ME, IAN AYRIS