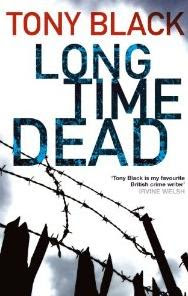 I’ve just finished reading, back to back, Loss and Long Time Dead; books three and four in Tony Black’s stunning series of Gus Dury novels. I read the first two, Paying For It and Gutted a while back, when they came out in paperback.

Now, hands up here, I’m no book reviewer but these books struck a chord with me and I wanted to put a quick post up about them.

Gus Dury is a washed up hack and an alkie with issues that stem from a troubled childhood. Gus has a quick temper and, at times, lets his fists do the talking. He’s fond of a pagger! After seeing his once promising journalism career and his marriage flushed down the toilet, Gus looks out at the world through the bottom of a whisky glass.

A friend asks a favour of Gus and he finds himself as a reluctant Private Investigator, pounding the mean streets of Edinburgh in his trusted Doctor Martin boots.

I read the books in order and I’m glad I did. Although each book is a standalone they chart a journey for Gus and, at times, reference key events from previous books.

But, by reading chronologically, I got a real taste of how Tony’s writing improves with each novel – not just the storylines but also how Gus evolves as a flawed and complex character; getting under his whisky sodden skin and a real understanding of the baggage he carries and the demons that haunt him.

It’s a bruising, rollercoaster journey for Gus. Along the way, written in first person, with a caustic and searing wit, we see and hear Gus Dury’s view of the world and his beloved city of Edinburgh, how it has changed; for good and for bad.

All four books are, in my humble opinion, cracking reads and highly recommended.

Check out the links/blurbs below and for a taster short story, care of The Rap Sheet, double digit HERE.

PAYING FOR IT
Former journalist Gus Dury has hit rock bottom – drifting from bar to bar, a drink away from Edinburgh’s down-and-outs, his high flying career and wife he adored now a distant memory. But his life takes an unexpected turn when a friend asks him to investigate the brutal torture and killing of his son.

GUTTED
When the gangland owner of a pit bull that killed a three-year-old girl is found gutted on an Edinburgh hill Gus Dury is asked to investigate, and soon finds himself up to his neck in the warring underworld of the city's sink estates. Amidst illegal dog fights, a missing fifty grand and a police force and judiciary desperate to cover their links to a brutal killing, Gus must work fast to root out the truth, whilst the case sinks its teeth ever deeper into him.

LOSS
Gus Dury is a changed man. He is off the Edinburgh streets and back with estranged wife, Debs. He has promised her that he won't get involved in any more dodgy cases which the police can't or won't solve. And above all, he's off the drink. In his pocket at all times is a half bottle of Scotch, but although the label is worn to shreds, he has never so much as loosened the cap. Then his brother Michael is found dead with a bullet in his heart and Gus' life begins to unravel all over again. How can he keep the promises he has made and still avenge his brother's murder?

LONG TIME DEAD
Gus Dury is back on the drink. While in hospital after a hit-and-run accident, his best friend, Hod, asks him to investigate the ritual, on-campus hanging of an Edinburgh University student. The murder victim's mother is a high-profile actress, who has promised a big-money reward. Gus, desperate for money, goes undercover at the university, taking a janitor's job, and soon uncovers a similar ritualistic hanging which took place in the 70s. Few of the students are prepared to talk about it - until another one of their group turns up dead by the same method. But Gus now moves into very dangerous waters as he begins to discover what and who is really behind it all - and he becomes the next target for the executioner.
Posted by Alan Griffiths at 08:51