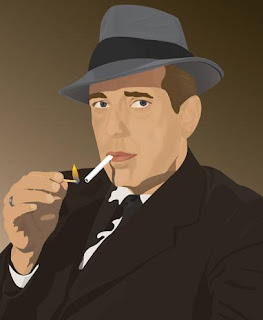 Shortly after my flash story TOAST was accepted by Thrillers, Killers 'N' Chillers I exchanged emails with co-editor Col Bury. Col asked if I was working on a novel and I said not at the moment. I’m not sure if I have a novel inside me, let alone the talent and determination to write it.

The email conversation got me thinking about a scene that popped into my head many months ago. I put that scene down on paper and it has gathered dust on my hard drive ever since.

I’m a fan of the PI genre – fiction, films/TV and I hope one day to write a PI story (short or long). My dusty piece, dated November 2008 with no name, may be the opening chapter to something. Or maybe not…

I thought I would post it here and see if it provokes a reaction. Hopefully not rotten fruit and eggs! Is it good, bad or ugly? Should I progress with it? Or right click and delete?

An insistent, unforgiving, shrill buzzing found its way through my unconsciousness. It viciously stabbed at numbed brain cells and stirred them to life. I groaned and rolled off the couch. I lay on the floor and tried to piece a few things together. I was in my office. The brass band bellowing in my head and a mouth as parched as the Sahara were souvenirs of a ferocious drinking session. Nothing else fell into place.

I staggered to the kitchen, turned on the tap, running it cold. The shakes spilled water down my shirt as I downed two pints of water like they were to be my last. The buzzing was outdoing the band for my attention.

I grabbed the intercom handset, belched, and growled angrily, “What the fuck!”

“Delivery and signature required.” An anonymous voice said. “I’m parked on a red route and the wardens are like piranhas around here.”

I dropped the receiver as the floor suddenly shifted around me. My stomach lurched in the opposite direction. Falling to my knees I crawled to the sink. With my head under the cold tap I let the water cascade, dousing the brass ensemble and steadying the dizziness. When I could take no more I turned the tap off and dried myself with a reasonably clean towel. The intercom continued to buzz long and loud. I cursed, crossed the room, opened the office door that announced ‘VALENTINE INVESTIGATIONS’ on grubby frosted glass and went shakily downstairs.

Bright sunlight invaded my world of pain as I opened the street door. The guy waiting impatiently on the other side was dressed in a gaudy uniform that did nothing for my queasiness. A package sat on the pavement at his feet. Traffic crawled along Lavender Hill behind him.

He was stick thin. I’d seen more fat on a roll of electrical cable. Showing me a set of bad teeth he made a poor effort at a smile. “Sign against six,” he said thrusting a clipboard and pen towards me with nicotine stained fingers.

Upstairs I put the package on my desk and went to the kitchen for more water and got the coffee percolator going. I took a mug of coffee through to my office and sat behind the desk. The package was about twenty inches square, covered in brown paper and masking tape. A courier sticker was stuck to one end. I pulled the pink flimsy free and scanned it. It gave nothing away.

I opened the desk drawer and took out a Swiss Army knife and began to tackle the wrapping. It took a few minutes until I was looking at a red cool box encased in bubble wrap. I sat there thinking while I finished my coffee but nothing came. The brass band were encoring with another raucous number so I went back to the kitchen for paracetamol and more coffee.

Curiosity got the better of me as I returned to my desk and tore into the bubble wrap. The cool box felt heavy in my hands as I lifted it clear and set it down again. I flipped the locks on the lid.

Amongst chunks of blood stained ice two eyes stared up at me. I gagged, dropped the lid and bolted for the kitchen to vomit violently. After a long while, when my retching had given way, I slid to the floor and sat there with my guts aching and sick dribbling off my chin.

I could see through the open doorway to my desk and the cool box that held the severed head of my cousin Vinnie. From what I could recall of last night, like me, cousin Vinnie was legless but his head was intact.

And if that load of old tosh has left you without the will to live then refresh yourself with an insightful piece on PI fiction and far more interesting read than my twaddle - a double digit here will do the trick.

Have a good weekend folks.
Posted by Alan Griffiths at 11:11