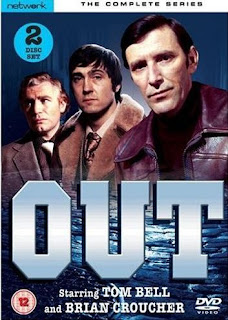 This blogging lark has got me thinking about my own influences and inspirations within the crime genre.

First and foremost I’m a fan of the genre and this has lead to my own sporadic amateur writing. I’ve always been an avid reader but film and television has inevitably played a part.

I started giving some thought to my earliest, British TV crime drama, memories and came up with such names as Public Eye, Callan, Special Branch, Hazell, Fox and of course, The Sweeney.

Another vivid memory from my teenage years (and the original reason for this post) was a one-off miniseries called OUT.

I have OUT on DVD and watching it again has underlined, in my opinion, what an outstanding piece of television it is.

Out was first broadcast in 1978 and was produced by Thames Television (Euston Films). A basic plot summary of OUT: Frank Ross (played by the excellent Tom Bell) returns to London after an eight-year prison sentence for robbery. The robbery was thwarted by the police because persons unknown had 'grassed'. Ross is determined to find out who the informant is and take his revenge. Over six episodes Frank Ross pieces things together...

I knew OUT was written by Trevor Preston who also worked on The Sweeney and later Minder but after I started to do a little bit of research for this post I soon realised that Trevor Preston also contributed to the other names listed at the beginning of this piece – Public Eye, Callan, Special Branch, Hazell and Fox.

As far as I am aware, Trevor Preston has only one published novel to his name, The Judas Crew, a paperback published by The No Exit Press. I said I was a fan and yes I have this in my collection. I read and enjoyed it a good few years ago when I first purchased it (oh how I miss Maxim Jakubowski’s Murder One bookshop on Charing Cross Road) but The Judas Crew will definitely now go back on my TBR pile so that I can refresh my memory once again.

If you remember these TV shows then please double digit on the links above folks and get some insightful information on all of this, which is much better than my off the cuff ramblings.

Trevor Preston is, in my opinion, a very talented, award winning writer. The following is from The No Exit Press website...

Trevor Preston has been involved with film and TV since the early sixties when he worked with Orson Welles, John Cage, Buckminster Fuller, Juliette Greco, Jean-Luc Godard, Jacques Tati and Alain Robbe-Grillet. He has written scripts for Callan, The Sweeney and Minder as well as for Ruth Rendell's work, and was the creator of Out and Fox. He has won many awards including a BAFTA.
Posted by Alan Griffiths at 01:47